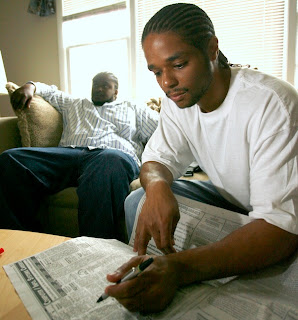 In 2008, Johnny Magee, who is developmentally disabled, was laid off from his landscaping job in Livermore, California, thanks to government budget cuts. He applied for a new position as a garden center attendant at a nearby Lowe’s Home Improvement store. Despite his prior experience, Magee wasn’t hired. Why? A background check had turned up a 1999 misdemeanor conviction, stemming from an incident in which he unknowingly picked up a package for his uncle that contained drugs. Later that year, Magee’s conviction was dismissed—but that was too late for him to get the job at Lowe’s.

Sixty-five million Americans—or one in four adults—have a criminal record. But employers—including major companies like Bank of America, Omni Hotel, and Domino’s Pizza—routinely post job ads on Craigslist that explicitly exclude such applicants, according to a new report conducted by the National Employment Law Center (NELP), a labor-affiliated advocacy group.

The practice appears in some cases to be against the law, and at a time of record long-term joblessness, advocates for the poor say it places yet another obstacle in front of people like Magee, who are working to get their life back on track. In addition, there’s widespread agreement that helping those with criminal records to find stable employment is crucial for preventing recidivism and preventing future crime. Indeed, that’s the reason that the government runs programs designed to make it easier for ex-offenders to find work.

Perhaps most important, effectively making more than one quarter of the American workforce unemployable may be an unsustainable policy for the economy as whole.

“Candidates must be able to pass: background check (no felonies or misdemeanors),” reads one ad placed by the bailed-out banking giant Bank of America. “Do not apply with any misdemeanors/felonies,” warns another. And one study last year found that 92 percent of employers said they screen some or all applicants for criminal records.

Many employers use outside companies that specialize in background checks—a fast-growing industry—to help screen out applicants with criminal records. A 2009 investigation by the state of New York found that RadioShack, working with the background check firm ChoicePoint, created a system that asked applicants “Have you been convicted of a felony in the past 7 years?” and automatically rejected anyone who answered “yes.”

Because discriminating against those with criminal records disproportionately hurts African Americans, the practice may violate the Civil Rights Act, which prohibits race-based hiring discrimination. Indeed, the Equal Employment Opportunity Commission (EEOC) has said that although considering an applicant’s criminal record may be acceptable on a case-by-case basis, an “absolute bar to employment” for such people is illegal.

Last year, plaintiffs brought at least five major civil rights lawsuits against large employers on the issue, but the National Employment Law Project wants the EEOC to enforce the law more vigorously. A spokeswoman for the agency did not immediately respond to a request for comment from The Lookout.

Still, the practice looks likely to grow only more common: Thanks to the tight labor market—there are currently five unemployed workers for every job opening—employers can be especially choosy about who they hire. Indeed, as we’ve reported, the EEOC is currently looking into another problem with similar roots: hiring discrimination against the unemployed.

(AP Photo/Ed Zurga: Lamar Brooks, right, scans the help wanted ads in the newspaper for a job while friend Harold Hagans looks on May , 2006, in Kansas City, Mo. Brooks, released in April 2006 after serving five years in a federal prison on drug charges, said that most people, when they hear he’s a felon don’t give him a chance.)