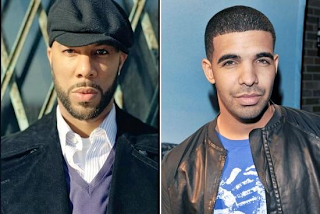 I’ve been watching this whole Common/Drake BS and it got me thinking about how an Emcee gains and retains his respect in the world of hip hop today.  First of all,  I am a fan of both and think that both are out of pocket. I don’t see how it can help either person’s career, but I do see how it can hurt Commons.  Common has to understand that this is a new age of hip hop. Diss records don’t hold the weight that that did in the days of “The Bitch in You” or “No Vaseline” so with that being said, the world of public opinion is going to protect their Golden boy.  Common is in a lose -lose situation no matter what he does.

Best Case Scenario: He beats up on Drake badly and wins the battle. He’s looked at as a Hater; A rapper who many of the young Drake fans either don’t know or think is past his prime (This thought is shared by many long time common fans as well) and is being a bully to a new school rapper that is successful and everyone loves. This will still be the outcome if Drake no longer responds only then Common looks like a Childish Bully.

Worst Case Scenario: Drake retaliates and Crushes Common “Bitch in You” Style and it is possible. Drake is a good rapper and a big fan of the Battle Circuit so he knows how to write, remember he was born in the underground. If this happens Common Looses Credibility with any new fans that he was attempting to Gain and the old ones that have been supporting him though the years (Even though he did drop the UMC” record).  And he is seen as the bully that just wouldn’t stop picking and got his Ass handed to him.  This would further solidify Drake as having Credibility as an Emcee with Common in the poster.  It happens.

Point is its not worth it for Com especially. What good is it doing? None.

See, in today’s World of hip hop Skill is not as important to the majority of music buyers as it is that you make them dance or get your song stuck in their heads.  We live in a world where Hip Hop is on the POP charts regularly and on the Ipods of Grandmothers and Grandfathers.  In this world the line between what is “Real Hip Hop” is blurred.  This does not mean that what makes it to the Pop charts is not good it just means that hip hop is more mainstream than ever. When the album of an underground Rap artist like Kendrick Lamar and an abstract Jazz Hip Hop group Like Shabazz Places are two of the top ten highlights in Pop Music for 2011 according to the New Yorker then it can be said that we are living in a different world. Who cares who can talk about each other’s mom the best at that point?

The world is open and waiting for those of us with voices to say something that they can grab on to and hold close to their hearts. The Platform is too important now to be used in this way anymore.  Granted, I Love a great lyrical battle just as much as the next man, but the stakes are too high for two of our champions to be at each other’s throats for something stupid. And just for the record Common has done some stuff Just as “Sweet” as Drake. I put money on it;  if Common could sing he would have on “UMC” and “Electric Circus” (I.E. “Jimi Was a Rock Star”), but thats not the point. The point is that this is another example of the crabs in a bucket. Drake didn’t deserve to be called out and Common should be too smart for this at this time in his career.  Let’s squash this stupidity make art and get along.  Word…